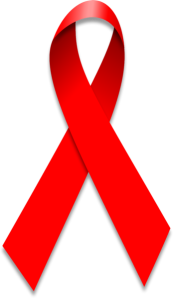 The AIDS epidemic took the world by surprise. There still is no cure for HIV/AIDS. The treatment is very expensive, and most people  worldwide have limited or no access to the life-prolonging drug cocktails. It is no surprise more than 25 million people have died of AIDS since 1981, when the first HIV/AIDS cases were brought to light.

After many years of study, researchers have discovered HIV is spread through contact with an infected person’s blood, semen, vaginal secretions or breast milk, usually during unprotected genital contact, sharing syringes or needles and, less frequently, blood transfusions.

Currently, prevention and early detection are becoming the route to battle HIV/AIDS. Local organizations like Stop AIDS provide free, confidential testing at their offices and in mobile testing centers. The University of Cincinnati Wellness Center even partners with Stop AIDS quarterly to bring the free testing directly to students.

Knowing your status is integral to stopping the spread of HIV, well, knowledge and practicing safer sex.

The UC Wellness Center also provides three free condoms a day to students, as well as other goodies such as lube, dental dams, adhesive bandages and pain relievers. A student simply has to pop into the office in 675 Steger Student Life Center to pick up the swag and help stop the spread of HIV. Other organizations such as Planned Parenthood also distribute condoms or safer sex kits. 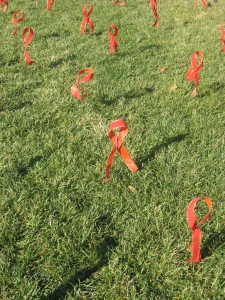 McMicken Commons at the University of Cincinnati is decorated with red ribbons for World AIDS Day.

Stop AIDS also provides other services in addition to free testing, including educating HIV+ people about accessing treatment and other resources. Services like financial counseling, transportation, housing assistance and chemical and alcohol dependency are among the array offered by Stop AIDS. For more information call 513-421-2437.

Other programs like syringe exchanges swap used syringes for sterile ones with intravenous drug users. The reasoning behind these programs is people are using intravenous drugs and spreading HIV/AIDS in the process. By offering a needle exchange, these groups are not promoting drug use, but decreasing the risk of contracting blood borne pathogens like HIV. Currently, Cincinnati has no such program, and 7 percent of Ohio’s HIV/AIDS cases can be credited to intravenous drug use.

In honor of World AIDS Day, people across the globe attend vigils or  remembrance services. Red ribbons are everywhere, even University of Cincinnati’s McMicken Commons has them. Facebook statuses, Tweets and blogs are devoted to the topic or go red for the day.

While all of this awareness raising is good, we still need to take action.

Wearing a red ribbon will not eradicate HIV/AIDS, but education, getting tested, having safer sex and using sterile syringes will curb the spread of HIV. There is no cure. The only option is to prevent it.

Find an anonymous HIV testing site near you.

5 thoughts on “Get tested in honor of World AIDS Day”