Over the weekend I was lucky enough to travel to Washington, D.C., and visit Capitol Hill, speaking to legislators about the Responsible Education About Life Act, Title V and the Global Sexual and Reproductive Health Act. While doing this, a few of us took the opportunity to speak to our legislators and Speaker Nancy Pelosi’s office about the Employment Non-Discrimination Act and repealing “don’t ask, don’t tell,” as well.

We were so excited to be in D.C. at Speaker Nancy Pelosi's office.

We kicked of our visits with Republican Sen. George Voinovich, from Ohio. Congress is in recess and most of his staff was out of the office, so we were not able to speak with anyone, but we did ask the receptionist to tell Voinovich to support ENDA and the repeal of “don’t ask, don’t tell.”

We had an appointment with an aide for Sen. Sherrod Brown, a Democrat from Ohio. I was impressed from the get-go with Sen. Brown’s office: All of his business cards are printed in braille and his office is that of President Barack Obama’s office when he was a senator.

The visit with Brown’s office was mostly a thank-you visit. He is already a co-sponsor of the REAL Act and he supports ENDA, the repeal of “don’t ask, don’t tell,” comprehensive sex education and reproductive freedom.

Next up was Rep. Jean Schmidt‘s office, of whom I am a constituent. The staunch Republican represents Ohio’s Second Congressional District, spanning from the east side of Cincinnati to Portsmouth. I had no visit scheduled, but one of Schmidt’s aides agreed to meet with me.

We sat in Schmidt’s office and briefly discussed the REAL Act from an economic standpoint — spend money on medically accurate reproductive health education so we don’t spend it on the myriad of social services provided to many people with HIV/AIDS and/or unintended pregnancies.

I also took an economic standpoint on ENDA and “don’t ask, don’t tell”: By discriminating against potential employees in the hiring process or dismissing members of the armed forces because of their identities, potentially valuable individuals are taken out of the talent pool. Also, employees that are not out at work are less productive.

Her aide argued with me on every issue. Schmidt currently stands behind the “don’t ask, don’t tell” policy, because high-ranking military officials support the ban. Her aide also indicated testimony, studies and reviews of the policy are still pending, and Schmidt is waiting for recommendations to come out of them.

The visit with Schmidt’s office was quite upsetting. I have previously visited members of Congress who did not have the same standpoint as me on an issue, and I have always been treated with the utmost respect, listened to and assured my comments would be passed on to the member of Congress. This is not the case with my interactions with Schmidt’s staff.

Schmidt may never agree with me, but as the person representing me on the federal level, I would at least appreciate her staff to be open to hearing from me. It is not her staff’s job to argue with everything I say when I interact with them; it is their job to explain Schmidt’s position on the issue, listen to what I have to say and pass on my comments. It would be unrealistic to expect my representative to agree with me on every issue, but her office should at least take constituents’ view into account.

We then moved on to a meeting with Rep. Steve Driehaus‘s office, a Democrat representing Ohio’s First Congressional District of metropolitan Cincinnati. This interaction was mostly to a thank-you visit as well. Driehaus supports ENDA and the repeal of “don’t ask, don’t tell” (He is a cosponsor of the Military Readiness Act, which would repeal “don’t ask, don’t tell”.), but he is pro-life. However, his aide explained, he understands comprehensive sex education is an issue separate from abortion and supports comprehensive sex education as a way to decrease unplanned pregnancies, and in turn, abortions.

Finally, we stopped by Speaker Nancy Pelosi‘s office to urge her to bring ENDA to a vote. After the March 18 ENDA sit-ins, we thought it would only be fitting to let Pelosi know we would also like some movement on ENDA. A staff member promised to pass on our comments. 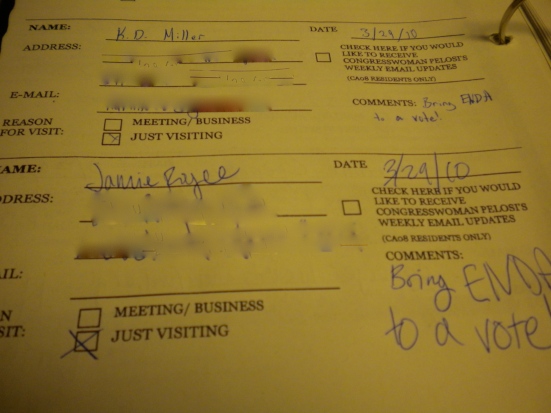 My lobbying companions and I sign in at Speaker Nancy Pelosi's office.

While we were in Washington, we stayed at a hotel across the street from the Human Rights Campaign, so on the way back to the airport we popped in. I wanted to speak with someone regarding the way the organization handled the Lt. Dan Choi debacle, but no one was available. The receptionist took down my comments electronically and e-mailed them out to someone in charge of member relations.

Now that I am back in Cincinnati, I plan on making follow-up visits with Schmidt’s and Voinovich’s offices. Congress is currently in recess, so the legislators are back here in Ohio, and the latest news on ENDA indicates it could come to a vote in the next few weeks.

And while my faith in the government and politicians to do much of anything productive has certainly reached all-time lows, I still live in a land governed by these people — I am going to make sure they hear my voice.

5 thoughts on “Taking it to the hill. Capitol Hill, that is.”