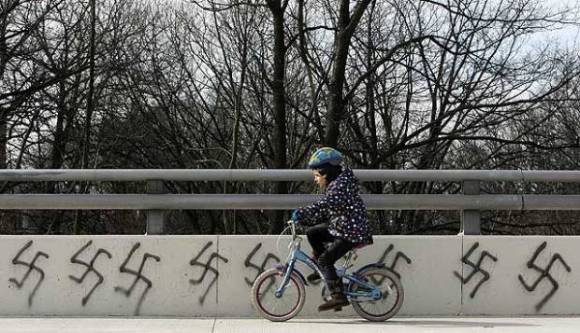 An overpass in Ohio marred with swastikas,a symbol of white supremacy. | Columbus Dispatch

Ohio, I’m really starting to think you’re trying to win some sort of most hateful place on Earth award. (Just an FYI: There ain’t no trophies for that.)

Anyway, a bunch of messed up stuff has been going on in my home state, especially revolving hate crimes, racism and suicide, which makes all the other things Ohio tries to do—like passing the heartbeat bill, cutting teacher’s salaries and banning gay marriage for the fourth time—seem almost harmless in comparison. Let’s review some recent events from 2012:

Jan. 16: On Dr. Martin Luther King Jr. Day, arsonists burned down the home of Mohamed Soltan, Ohio State University student and former OSU Muslim Student Association president, while he and his roommate were sleeping. Both people escaped the blaze, but lost everything they own in the fire and were left homeless. Over the course of the months leading up to the arson, Molton endured racist attacks. People wrote on his garage “Fucking terrorists go home,” keying the same message onto Soltan’s car, as well as “terrorists, leave us alone.” The intimidation tactics also included egging his house, smashing his mailbox, and slashing the tires on his car and the cars of his guests.

Jan. 23: The Lantern, OSU’s student newspaper, ran an ad titled “Former Leaders of the Muslim Student Association (MSA): Where are they now?,” likening Muslims to terrorists and listing the names of several al-Qaida and al-Shabab members who were MSA presidents during their college careers. At the bottom of the ad was the name of the pamphlet, “Muslim Hate Groups on Campus.”

Feb. 19: Clintonville is covered in racist graffiti inlcuding swastikas, the symbol of the Nazi party and white supremacy. A white OSU professor’s car had two swastikas painted on it, and he suspected it was because he has a black son. The message, “Kill all niggers,” was also tagged around the neighborhood, as well as a message written in German that translates to, “Victory to the white race only.”

Mid March: Austin Rodriguez, a 15-year-old openly gay student at Wellsville High School, was put on a ventilator after attempting to take his own life by swallowing over 100 prescription pills. He was bullied at school after coming out as gay.

March 24: Miami University student Michael Bustin and University of Cincinnati student Adam Voegele were attacked in Oxford near Miami’s campus. Four people targeted Bustin and Voegele as they were holding hands while walking home at 2 a.m. from an annual drag show sponsored by Spectrum, Miami’s gay-straight alliance. The attackers screamed derogatory, anti-gay slurs before violently beating the two students. This the second attack at this event in three years.

Early April: As a part of the “NoMorePU” marketing campaign, kitty litter distributor Tidy Cats sponsored a billboard about a mile north of Over-the Rhine that read “You’re so over Over-the-Rhine. Life stinks.” Over-the-Rhine is a predominately black neighborhood in Cincinnati, and the epicenter of the 2001 race riots, poverty and gentrification in the city. The area has also been named the most dangerous neighborhood in the U.S. by the FBI. After public outcry, the billboard was taken down by April 10.

April 4: OSU Police detained and drew their weapons on student Mike Newbern for wearing a gun holster to a candlelight vigil for for the racially motivated murders of Trayvon Martin and Shaima Alawadi. Newbern, the president of Buckeyes for Concealed Carry, contends he was demonstrating his support for gun rights by standing at the front of the crowd wearing what turned out to be an empty holster.

April 5: The words, “Long Live Zimmerman” were spray painted on the side of the OSU Hale Black Cultural Center. George Zimmerman is the alleged murderer of Trayvon Martin.

April 6: Three swastikas and the word, “niggers” were spray painted on the Hope Mural—a commemoration of the first black president, Barack Obama—in Weinland Park the near OSU in Columbus.

So, things are getting serious at home in Ohio. Very serious. It has become very clear that Ohio is not a safe place for many people, especially people of color and LGBT people. But that’s not really news:

And if we look at the general Tri-State area, the corners of the three states Greater Cincinnati encompasses, there’s more:

Highlights from the flier, titled “Are the homos really harmless????,” include “The promotion of homosexuality and of its acceptance by decent people has been promoted by the destructive forces in this country as another way to remove any semblance of order, of right and wrong, in our society,” and “Their sordid lifestyle deserves nothing but shame and disgust from all normal people and special treatment for perverts will not be tolerated.” It also describes Cincinnati Guerrilla Queer Bar, a group I organized with at home, as:

“a group of local perverts … which purposely flaunt their perversion, filth, and mental disorder on normal people by PURPOSELY targeting normal bars for faggot get-togethers … They seek to ‘queer’ the ‘straight’ bars and clubs according to their mission statement. So is anyone to blame but themselves when a normal person is fed up with this perversion being thrust upon them in such a blatantly offensive way? Sure assault is illegal, but it is safe to say that most normal people are happy to see that some among us will put these social rejects in their place when there [sic] excesses become to [sic] much to tolerate.”

The fliers were posted in response to Covington residents meeting with city officials regarding violence and run-ins with the police that residents felt were motivated by homo-negative attitudes.

And most of this is just since I started blogging Jan. 14, 2009, or something I learned about while blogging. I’m sure there’s been so many more incidents that have gone unreported, that I didn’t hear about (most of these stories received little to no coverage in mainstream news) and/or happened before then. And that’s not even including the people who suffer from or have died from other issues, like no access to health care, or adults who committed suicide.

This is where I come from. These are people I know. These are places I’ve been. We all have stories of being brutalized, attempting suicide, experiencing homelessness or being shipped off to ex-gay therapy. This is the reality. And it’s just jaw-dropping to see it all laid out like that at once.

And thank all things that are good for our community’s responses that look like this:

Miami University and University of Cincinnati rally against a March 2012 hate crime in Oxford. | Beelisty 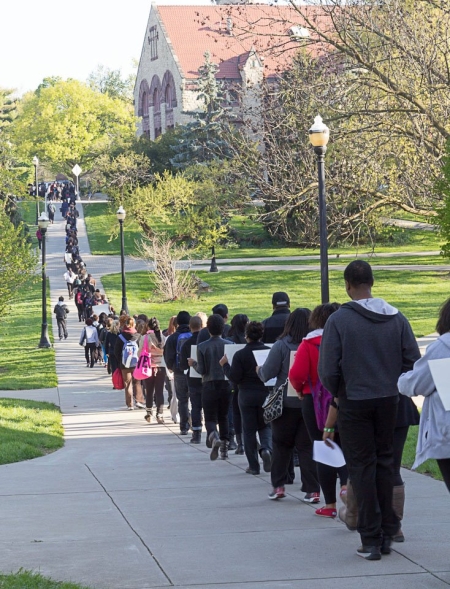 Approximately 200 Ohio State University community members march to a trustee board meeting in response to the recent hate crimes on and near campus. | Sam Cooler

This sign appeared at Tabby's bar following the hate crime that occurred there in May 2009.

All of these incidents cannot be separated. They are an overall reflection on our culture, of our attitudes, our laws and what we teach each other. And we have to work together to change it.

Oppression isn’t perpetuated by bad people. That’s the problem. I’d be hard pressed to even find a truly bad person. It’s not a few bad apples ruining the entire bunch. It’s the people we interact with everyday. The people we work with, we go to school with, we organize with, we live with, we love with. It’s our communities. It’s the choices we make. It’s us.