Flagging, also know as the hanky code, is a way to signal to others what type of sex, kink or fetish someone is seeking. It’s an subtle way to express a potentially taboo or deviant desire publicly to those initiated to the code while going unnoticed by the normative culture. Flagging opens a platform for negotiating those desires by inviting potentially sexual attention. (And while flagging means being open to being propositioned and to being rejected, a flag is not be misconstrued as consent.)

A Village Voice journalist is credited with the birth of the modern hanky code in 1970, jokingly suggesting that instead of wearing keys to indicate whether someone was a top or a bottom, it would be more effective to announce a particular sexual desire by wearing different colored hankies in their back pockets. There were only a few colors suggested—red, navy, light blue, green and black—because that was all that Levi’s produced at the time.

The practice of flagging has since become popular among queers of all genders, and the colors and the meanings behind the bandanas has evolved to include nearly every shade of sex, kink and fetish.

Well you can rejoice, because through conversations I’ve had with other femmes, alternative flaggers and general hanky code enthusiasts, I’ve come up with the following tips:

Wear a bandana on your head, in your hair like a headband or around your neck. Tie the knot on the right to indicate bottom, the left to indicate top or behind your head to indicate switch. 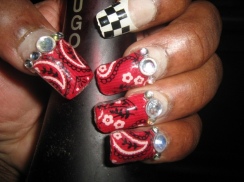 Paint your nails. Pick a color that corresponds to the hanky color you wish to flag. Paint your left hand for top, your right hand for bottom or both hands for switch. Or just paint the ring finger on whichever side you’d like to flag. If you’re very talented at nail art, you can paint a bandana print on top of the color you’re flagging or pick up some bandana nail decals.

Create a belt out of hankies. Knot a bunch together in one color or multiple colors and tie it around your waist like a belt to indicate switch.

Tie a hanky to your wrist, ankle, boot, belt loop or wherever else you can. Just put it on the side you wish to flag. 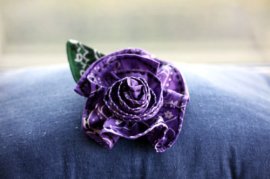 Make a pin, charm, hair accessory, etc. out of bandanas. Kinky Craft on Etsy sells hair flowers handmade out of hankies that can be clipped anywhere. Or you can get crafty and pick up some of your own bandanas and make something fierce—like a bow or a pin or whatever you want.

Try scarves or ribbons as an alternative. Think hankies are heinous? Does a bandana clash with your outfit? Sub in a plain color fabric or use scarves or ribbons. This would probably work exceptionally well for codes that do not resemble the traditional bandana print, like houndstooth, argyle and multi-color polka dot.

Bottom line: Get creative. These are just a few ideas I’ve picked up. There’s a million ways to flag—it’s really up to you.

This is a chart of the more traditional hanky code meanings. (A screen reader friendly version of this chart is available here.) 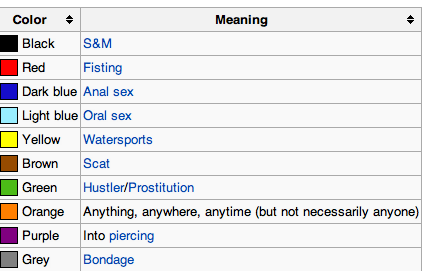 This is an expanded hanky code chart, building upon the traditional meanings. (A screen reader friendly version of this chart is available here.) 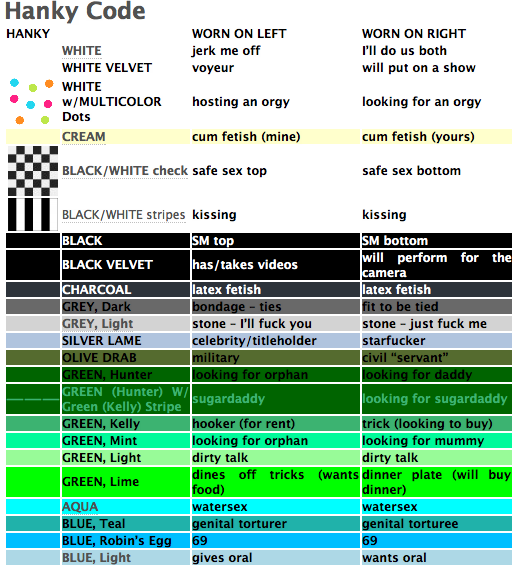 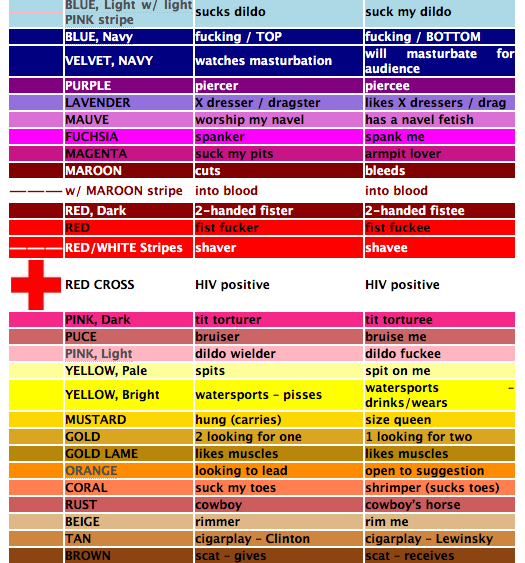 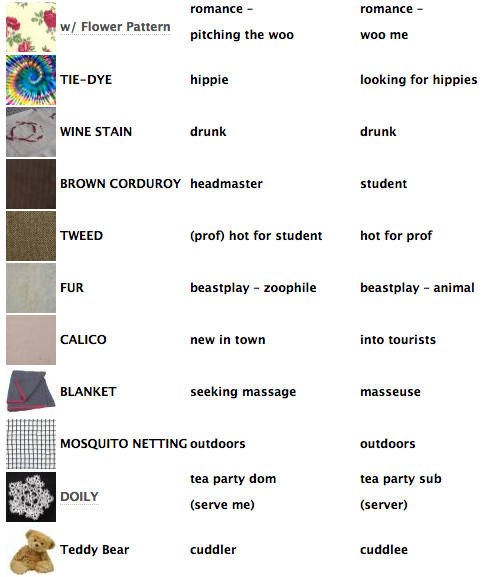 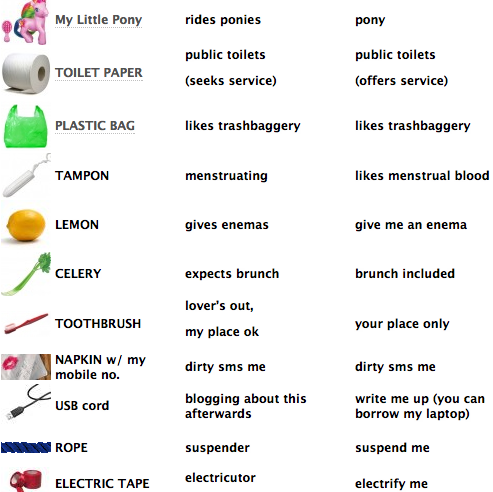 NOTE: The above hanky code was created by the flagging opinicus rampant bloggers and commenters as a queer feminist and pangender response to the traditional gay male code. It isn’t a standard or traditional hanky code but more an ongoing commentary. See updates to the code and join in the discussion here.